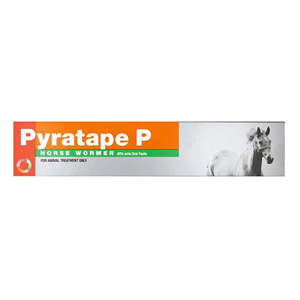 Pyratape P is an anthelmintic paste, which effectively treats adult infections caused by large and small redworms. It efficiently treats ascarids and pinworms found in the gastrointestinal tract of horses, ponies and foals. Pyratape P is a clinically proven paste for tapeworms and other worms including large roundworms, large strongyles and small strongyles.

This has been very easy to give to my buddy. No fussing, put it on the tongue and it can be swallowed.

Best worming paste for our horses

best value dewormer there is for our barn. I use it on all horses in our barn.

So much easier to dose

This so much easier than measuring something to put in their water. or spread through the pellets.

AFFORDABLE HORSE WORMER FOR OUR BARN WITH TEN HORSES