7%
Discount on all orders -
Use Code : SUMMER7
Reviews for Panacur Equine Granules for Horse Supplies 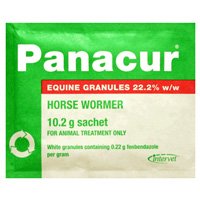 Panacur Equine granules is a broad-spectrum wormer which controls infections caused by benzimidazole susceptible immature and mature stages of roundworms found in the gastro-intestinal tract, including large redworms (Strongylus vulgaris, Strongylus edentatus) and migrating large redworms, small redworm and mucosal larvae, Ascarids, Oxyuris and Strongyloides species. During the grazing season, it is recommended that horses and ponies should be treated every 6-8 weeks.

Panacur Equine Granules consists of an active ingredient i.e. Fenbendazole. It kills various worm eggs and adult worms. It is very efficient in treating and controlling migrating larval and adult stages of all main species of roundworms. These unflavored granules have potent action against migrating and encysted larvae.

Holy Cats! They ate it. And the fact that it is an extremely effective dewormer is almost an afterthought.

perfect product to deworm our ponies.

Treats tough worms in our horses.

Unlike other wormers, it is easy to administer as we just mix it in pellets and work is done